The history of the township of Pimpri-Chinchwad can be traced to several hundred years back.  Nearly two thousand years ago, the township was ruled by the legendary Hindu King Bhoj and the present ‘Bhosari’ was the capital of his erstwhile Empire.  It was then known as Bhojapuri.  Incidentally, The Maharashtra Industrial Development Corporation (MIDC) also has its base in Bhosari.

Archaeologists have discovered the 2000 year old 'Artist temple' and the "Artist Mahal" situated at Bhosari or the erstwhile Bhojapur.  King Bhoj is reported to have organized many cultural events here. The artists performing at the Artist Mahal used to reside three kilometers away from the capital city. 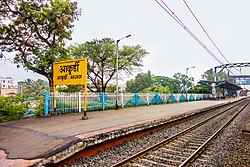 The Glorious past of Pimpri Chindwad

During excavation of the city many artifacts like pots and other equipment were recovered, which date back to 200 A.D. The copper plate that belonged to the Rashtrakuta emperor Krishnaraj,  is in display at the museum in Vishrambaugwada in Pune, was actually found in Bopkhel village. The famous idols of Gajlakshmi and Ganesh at the Bhairavnath temple in Dighi village belong to the 13th century.  Some writings on stone, dating back to the 10th century have been found.

The village of Pimpri Chinchwad had a 14 feet high entrance gate, which is mentioned in 1885 Bombay Gazette.

The township of Pimpri Chinchwad was also a part of the Yadav Dynasty during 850 AD to 1310 AD. Many sculptures of people who died in wars and relics relating to this ancient past have been found by archeologists. Ancient temples of various local Gods counts amongst the various tourist spots in the city.

Bhosari village has a history dating to Gautam Buddha's era. Other places of interest in Pimpri Chinchwad are Khandoba Mahal, which houses a temple of Lord Khandoba. Every year millions of pilgrims visit the temple town of Alandi near Bhosari, and pray at the Samadhi (Tomb) of most revered Saint Dnyansehwar.

The history of Pimpri Chinchwad  can not be complete without the mention of Saint Morya Gosavi.  This is his birthplace and whose holy tomb, which is located in Chinchwad, is a much visited place by all Ganesha’s devotees.  A folk-tale about Morya Gosavi mentions that two Ganesh devotees Vaman Narayan and Bhat Shaligram, natives of Bidar village in Karnataka state came to Morgaon - a pilgrim center in Maharashtra, in 1330.  At Morgaon, Bhat Shaligram worshiped a holy tree dedicated to Lord Ganesh and within a year he was blessed with a son.  The child was named Morya by Bhat Shaligram. One day Morya became critically ill and was saved only by the treatment given by a priest named Gosavi.  Since then the boy came to be known as Morya Gosavi.

Morya Gosavi was a great worshiper of Lord Ganesh.  Folklore says that Morya Gosavi had realized the presence of Lord Ganesha in him. On every chathurthi (fourth day after full moon), he would visit Theur and he had dedicated his entire life to the devotion of  Lord Ganesha.   When his wife Umabai died, in the year 1556, and his Guru Shree Nayan Bharati took Samadhi (go alive in a tomb) , Moraya Gosavi decided that  his tasks in this world are complete and, in the year 1556, he also took to Samadhi (go alive in a tomb).

An interesting anecdote says that Emperor Humayun - the Mughal Ruler of Delhi, during his exile at Gujarat, came to know about the divine-popularity of Morya Gosavi.  He requested Morya Gosavi to save him from his plight, who in turn assisted in arranging a safe passage for the Emperor to Kabul. Soon, Humayun's fortunes changed and he returned to rule Delhi. As a token of gratitude the Emperor had sent gifts to Morya, which is noted in a history book written by Parasnis and Martin, called “Sanads and Letters of Humayun”

Chinchwad is an old town and finds its references during Shivaji and Peshwa's periods.  A book called Sanskrutichya Pavulkhuna, released by PCMC, mentions Pimpri Chinchwad’s association with Marathas and also writes about  its three very famous temples -- Sathvai temple in Pimpri, Tulajabhavani temple in Akurdi and Khandoba temple in Bhosari.  The Sakhai alias Shitaladevi temple in Pimpri was well known during the Maratha period and the women belonging to the families of Deshmukhs, Jahagirdars and Sardars from the surrounding villages often visited the temple.

Released in 2007, the book also mentions a lake in Pimpale Nilakh, along the banks of which the Maratha army used to camp.  Pimpale Saudagar was a marketplace, in those days, where the traders met to do business, and that is how it got the name -- Saudagar.  The armies, during the Satavahan, Maratha and Mughal periods, used to camp near Indrayani village.

Sanskrutichya Pavulkhuna mentions that a Wada (big house), which was built in 1731 by Devji Tapkir - a Sardar or Captain and it still stands in Chikhli village.  Bhosari and Chikhli villages were surrounded by a wall that was destroyed in 1818.  It also refers the historic background of Charholi. The Kholeshwar temple, built by Kholeshwar, the Prime Minister of Yadavas, speaks volumes of its glorious past. A boundary wall and a market built during the Maratha period can still be seen in Charholi.

The famous fighters Chaphekar brothers and Halbe belonged to Chinchwad, then a small village.

In the mid-1950s, the green fields of the villages on the sides of the highway and railways linking Pune to Mumbai became choice locations for large industrial development. In the 1960s, the newly founded Maharashtra Industrial Development Corporation (MIDC) purchased vast tracts of land to build suitable infrastructure like roads and water supply.  Soon it showed results when it became home to cluster of industries - pharmaceutical, mechanical, automotive, and, more recently, information technology, home to many MNCs and companies of national importance.

Hundreds of thousands of people migrated to this the new hub to fill the jobs and  get benefit from rapid development. This increased the demand for residential property and the planned development of the area became the hot-spot for real estate business.  In 1970, the scattered village jurisdictions merged into one single municipal authority, the Pimpri-Chinchwad Municipal Corporation (PCMC).

History of its name and proposal for Re-naming

It is said that the name Chinchwad is derived from the trees – tamarind (called Chinch in Marathi) and banyan (called Wad in Marathi).

Recently a proposal to change its name to 'New Pune' has been deliberated amongst politicians, intellectuals and members of the business community, as it is advocated that this would launch the city as an international city, teaming with Pune.

The New Pune brand name was first proposed by the Commissioner of  Pimpri-Chinchwad, Mr. Dilip Band. No progress on the name change has been noted as of now.  But for sure most of the locals would like to retain its old name.